Prince Henrik is an artist, but not only an artist.
He is a poet, a sculptor and a diplomat.
He was born in France, where he studied and formed his knowledge and culture, at the renowned Sorbonne in Paris.

But Henrik left France and went to live in the beautiful country of Denmark, because of a special girl, a girl that stole his heart, a girl that was destined to a great future.
There, he married Margarete, the beloved Queen of this creative and lively country, in the Church of Holmen in June the 10 of some years… ago.

The royal couple has been living happily since then and has given birth to two sons, Crown Prince Frederik (born 1968) and Prince Joachim (born 1969), but this is another story…a story that everybody knows and loves.

The story we want to tell today is a different one, is the story of Prince Henrik the artist, who after retiring from his many diplomat chores, has chosen our foundry to cast this beautiful work evocative of an elegant mermaid overlooking the bay, reminding sailors of Ulysses’s long lasting travels and adventures 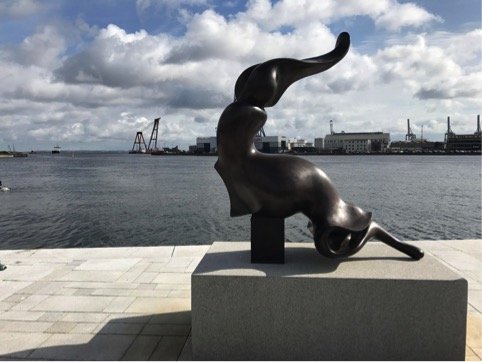 His works influenced other artists, musicians and poets and “The symphonic suite Cantabile” by Frederik Magle is based on Henrik’s poetry collection Cantabile and was premiered by the Danish National Symphony Orchestra at two concerts celebrating Henrik’s 70th and 75th birthdays in 2004 and 2009.

This is how Henrik described the art of poetry: “I see poetry as an opportunity for immersion in a superficial time dominated by news and entertainment that makes us rootless and restless.

Poetry takes us closer to the true nature of the world; in poetry we can approach the eternal questions such as love, loneliness and death.”