Ascoli Satriano is a small city located in the North of Puglia, in the province of Foggia, founded by the ancient people of the Dauni and subsequently included in the group of cities of the Magna Graecia ruled by the city of Taranto.

Its history is full of events but in 1978 a group of clandestine archeological finders, the so-called “tombaroli”, discovered in the countryside of Ascoli Satriano, a hypogeal (underground) tomb with a very important set of funeral furnishings.
The tomb certainly belonged to one of the hegemonic noble families of the area, during the 4th century BC, probably of Macedonian or Epirot origins.

Among the magnificent fundings, the most important one, was a wonderful sculptural group of coloured Aphrodisia marble, a complex triangular sculpture of polychrome marble consisting of a table support (trapezophoros) with two griffins biting a deer.
The tomb also contained a ritual basin (podanipter), portraying the scene of the transportation of the weapons, forged by the god Hephaestus for Achilles, a pair of shelves and a large marble crater which retains traces of polychromy. 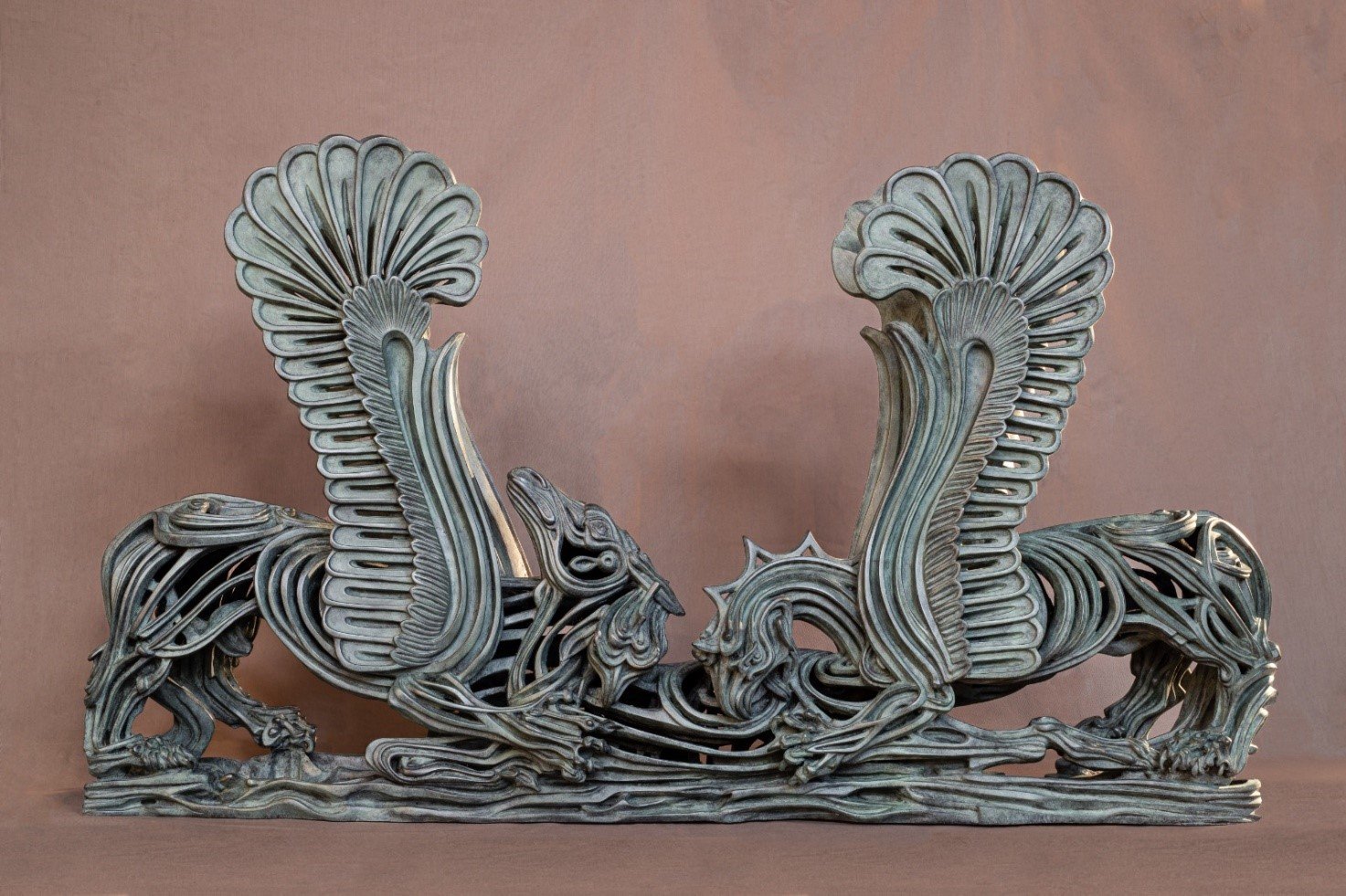 The extraordinary sculpture, used as a bracket for a ritual table, is 95 cm high, 148 cm long and consists of a pair of “GRIFFINS” with the body of a lion and the head of a eagle with a purple-red crest on the head and blue wings spread upwards.
The two figures are represented in hunting action while they block on the ground with their claws a doe, whose face emerges, with its front legs bent and the rear ones fully extended.

After many vicissitudes, the stolen artifacts ended up being exhibited in the Getty Museum at Los Angeles and finally in 2010, the entire sculptural group returned home to find its natural location in the Archaeological Museum of Ascoli Satriano thus becomes the “City of Griffins” and to give greater prominence to this extraordinary novelty, a competition was launched to equip the main square of the town with a new monument replacing the existing one.
Michele Celeste, a young sculptor, won the competition with a project that aimed to reproduce, in bronze with his personal and innovative style, the extraordinary Griffins as the characterizing element of the new monument destined to be the highlight of the new square. 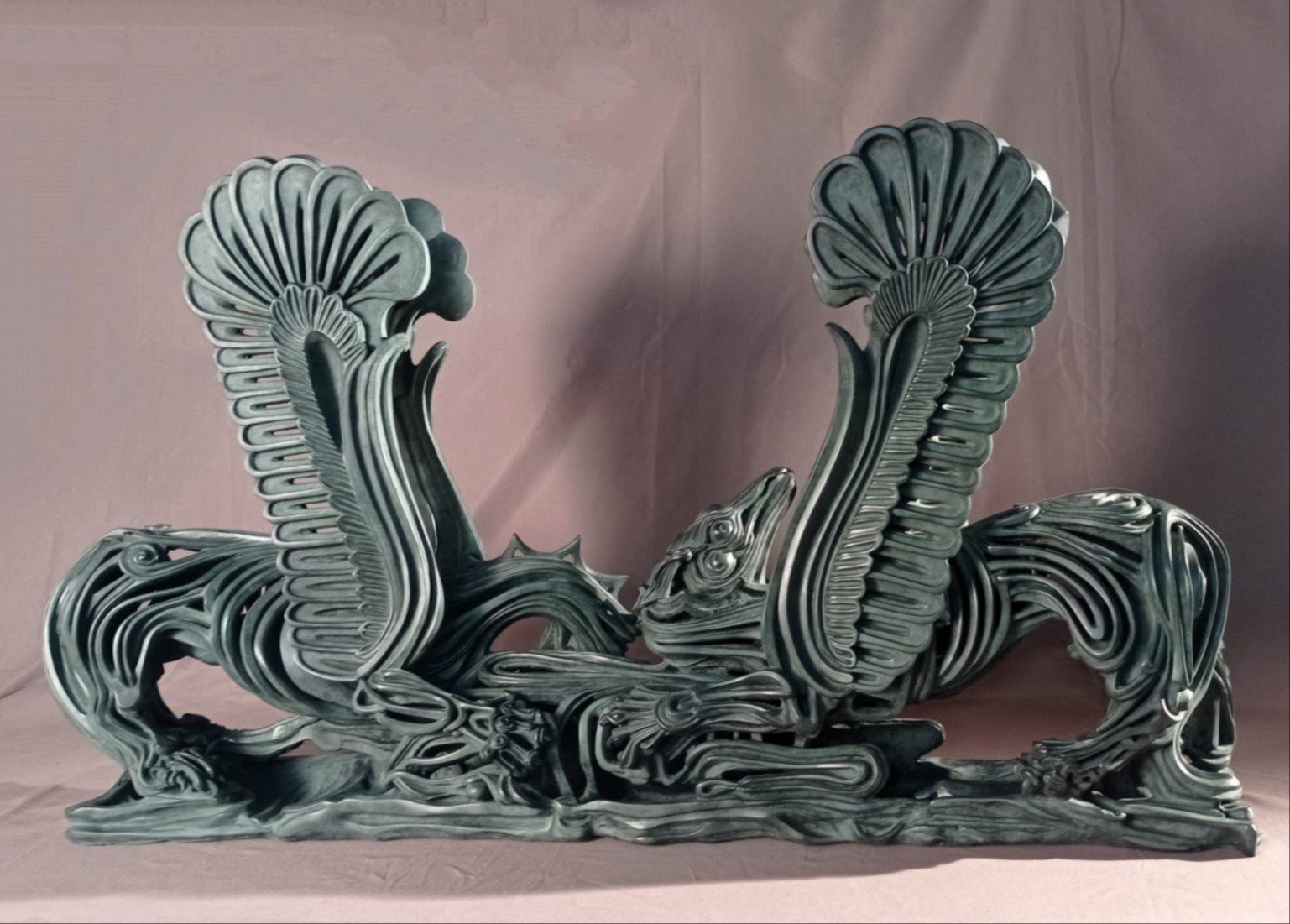 After modelling the sculpture in clay in his laboratory at Rome, he thus move to Pietrasanta, where it is made reproduced in plaster and silico rubber, by Alessandro Petrucci. Then came into contact with Mariani Artistic Foundry to bring his work to life.
In this process it was certainly crucial the meeting of Michele Celeste with Adolfo and Nicola Agolini, who, having seen the project and assessing its effectiveness and expressive power, declare themselves very happy to contribute to its realization. 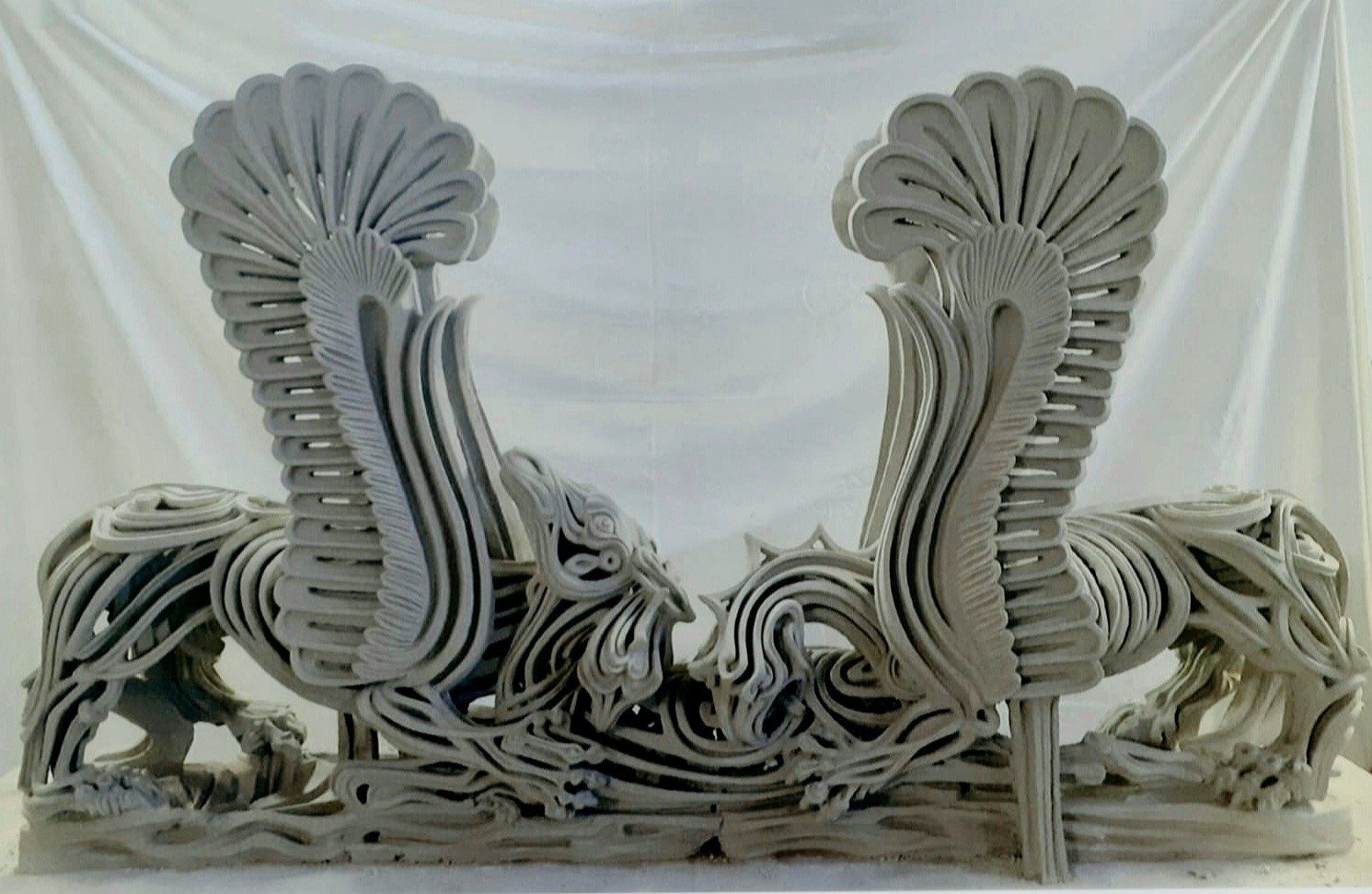 It was then proceeded to model the sculpture in clay with dimensions fully corresponding to the Greek model, while the base was raised about 2 cm in view of its placement on a column, as requested by the client.
The geometries and details of the work, such as the number of feathers and wing feathers, were duly respected as well as the dimensions H 97 cm, W 155 cm, D 25 cm at the base and 40 cm at the chest of the Griffins.

The bronze sculpture had a total weight of 250 kg and it was chosen to give a greenish patina obtained by the copper oxide applied to dark bronze.

But the real turning point was the special formula studied by Nicola Agolini, to facilitate the casting of the piece, a formula that was more suitable to the nature of the sculpture and its peculiar characteristics.

The touching up was performed with chisel and mechanical tools, to enhance the details and the geometrical finishes, allowing the light to flow on the surfaces without encountering unwanted roughness or deformations of the surfaces.

The creative process saw the clay model broken down into different parts, like the wings, which were created and shaped separately. 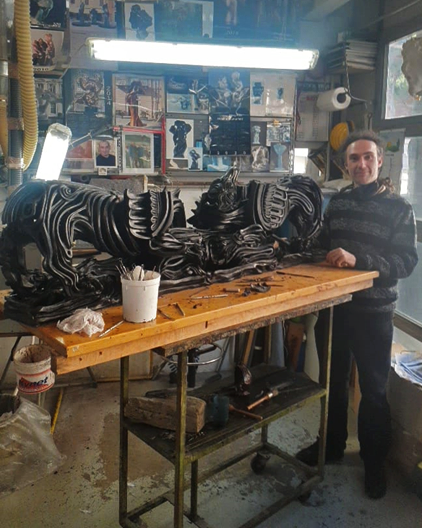 The artist worked personally on the finishing up of the waxes and the subsequent assembly of the pieces, in strict cooperation with the Foundry, obtaining two separate blocks to be cast.

After the lost wax casting with the Shell method, or ceramic mold, the bronzes obtained from the process, were sandblasted. 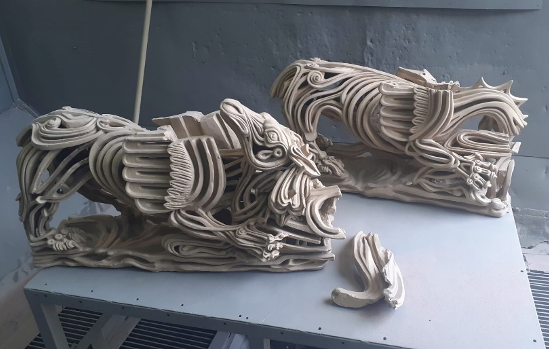 Some details were made in full bronze due to their load-bearing function.

The weldings were carried out in bronze with Tig technology, while the more complicated areas were worked on with silver welding. 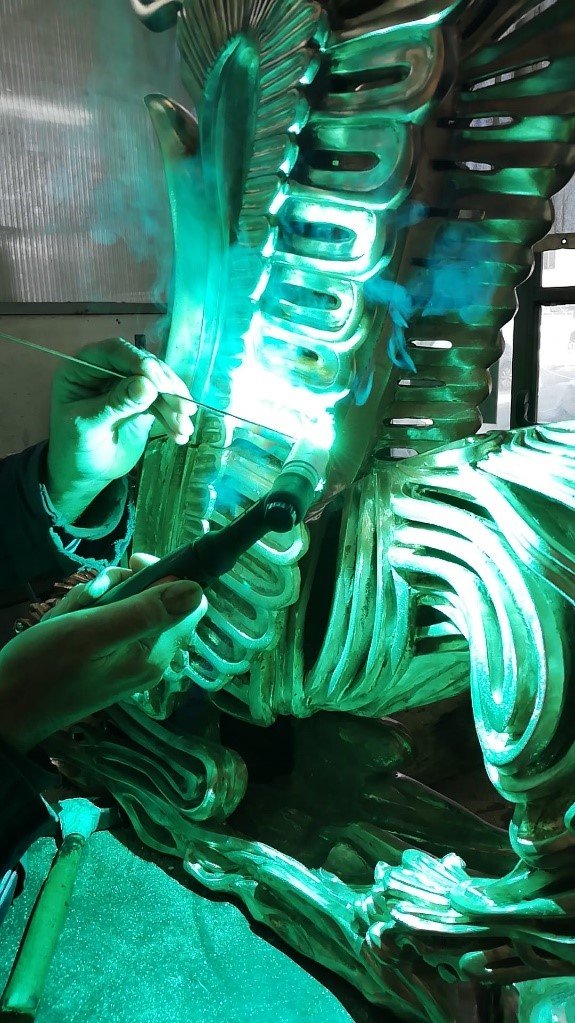 Mechanical tools and chisels were used to clean up the welds.

The long and complex finishing up of the piece, occurred respecting the methods of the ancient Greek sculptural tradition, which involves a process very close to goldsmithing, which makes it possible to obtain a smooth and well-defined surface, through the skilful use of chisels, goldsmith’s files, burins and abrasive papers. 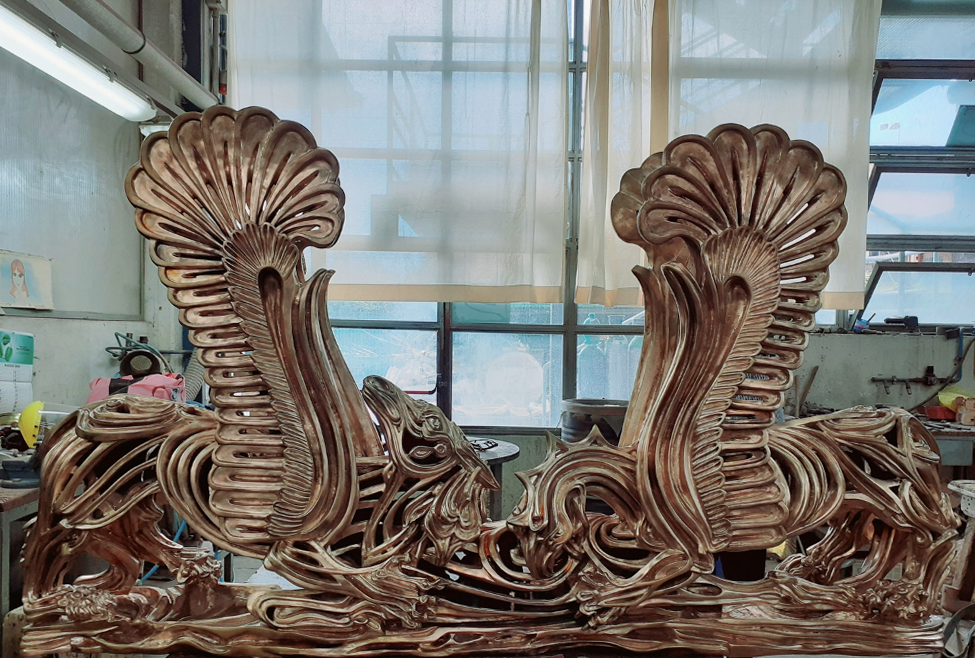 After that, some steel bars were welded into the base of the sculpture to create an anchoring frame, on which threads have been made and placed on the column capital by steel pins.

The last step saw the patina being applied by the artists and the artisans working as a unique nucleus and after the material cooling off, neutral wax was applied to the bronze to protect the patina and give the sculpture a great shining look. 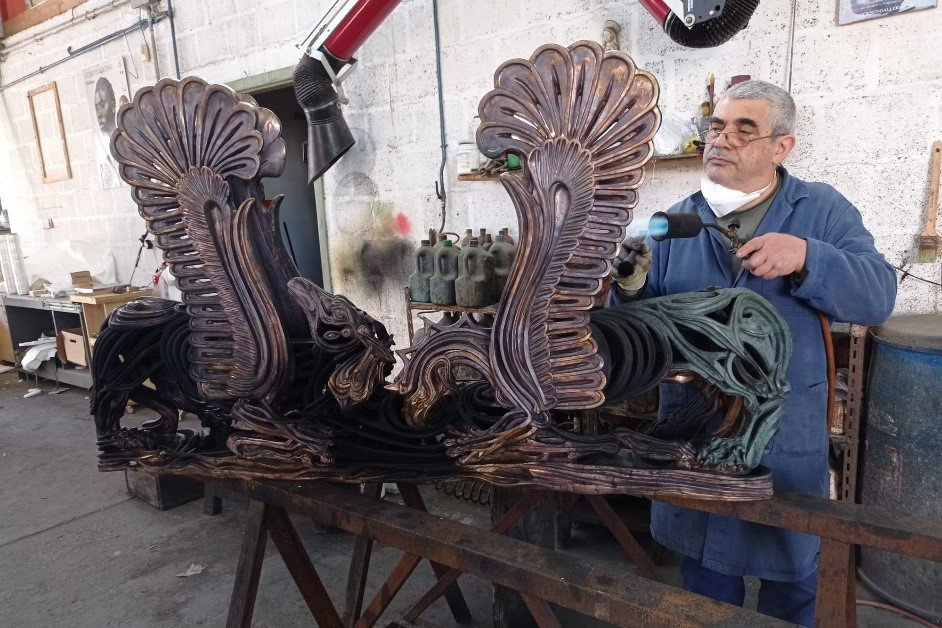 For all images #photocreditMicheleCeleste
Sculpture made by: Michele Celeste
Contacts: celestem@alice.it tel: +39 3279088658